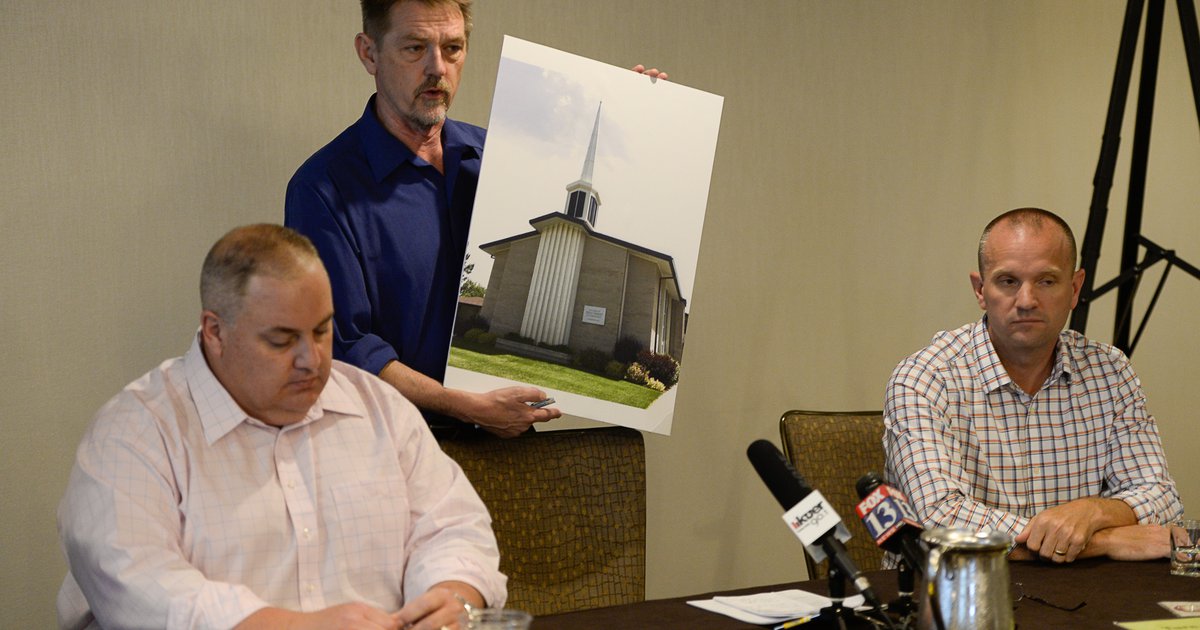 Bízhínłth baá says she was repeatedly raped by her foster father in a small town in Utah’s Cache County.

Then 12 years old, the Navajo girl knew that what her foster father was doing to her “three or four times a week” wasn’t right, but when she reached out for help to a local leader of the women’s Relief Society of The Church of Jesus Christ of Latter-day Saints, baá says, she was met with disbelief. Worse, she was scolded and slapped.

“Do not tell anybody,” she recounts being warned. “And you think I had fear? Oh, I had fear. You can’t believe the fear I had.” And so the abuse continued throughout that school year, until the next May, she says, when she was returned home to the Navajo Nation.

“My life was ripped apart, and to me, this all happened as if it was yesterday,” baá, now 65, told The Salt Lake Tribune.

The only remaining plaintiff from among more than a dozen who filed sex-abuse complaints against the LDS Church involving its long-abandoned Indian Student Placement Program, she spoke on condition the newspaper identify her only by her Navajo name.

Nine other plaintiffs settled with the church in August, said attorney Craig Vernon, of Coeur d’Alene, Idaho, who along with Billy Keeler, of Gallup, N.M., represented the former foster children. Three other cases were settled in mediation last year. All signed nondisclosure agreements.

The LDS Church declined requests for comment through a spokesman.

Vernon told The Tribune he could not discuss the settlement terms except to say they did not include policy changes requested nor an official apology for perceived racism in what was sometimes called the Lamanite Placement Program.

“I will say that with a settlement like this, there is always a compromise,» Vernon said, » … because there is risk for both sides.»

Plaintiffs’ attorneys prevailed in the first round of a jurisdictional battle when a judge ruled in May that the cases should be heard in Navajo court, where they were filed, rather than in Utah federal court, where the church said they belonged.

Vernon said, though, that he worried about a successful church appeal and a high likelihood of dismissal if the cases were moved because of the statute of limitations.

In that event, Vernon said, the abuse victims “would have gotten nothing.”

So is he satisfied with the outcome for his clients?

A monetary settlement, even with no admission of guilt, serves as an “acknowledgment that [the defendant] had some culpability in what happened,” Vernon added. “So I think the money is always symbolic to my clients that, ‘Look, somebody recognizes what happened. Somebody believes me.’”

For baá, it was not enough. She declined a settlement offer and is in the process of continuing her lawsuit with a new attorney.

The woman says she wants the church to apologize and, as outlined in her lawsuit, she wants it to reform its practices in reporting and dealing with abuse — including a policy that every church leader be “a mandatory reporter of sexual abuse, regardless of whether mandatory reporting is required by law.”

In Utah, every person is required to report to police if they become aware of abuse of someone younger than 18, says Gwen Knight of Prevent Child Abuse Utah. But there is a religious exemption if “the perpetrator made the confession directly to [a] member of the clergy” who is “bound to maintain the confidentiality of that confession,” according to state law.

Vernon, who specializes in abuse cases involving the Catholic and Mormon churches and has represented hundreds of clients in such cases, said the LDS Church encourages members to report abuse internally.

Members are urged to tell bishops, who then call a hotline arranged by the church, according to Vernon. Attorneys staffing the hotline then provide legal advice that may or may not include reporting the abuse to police, he said.

The LDS Church has long maintained that it takes abuse, especially sex abuse of a child, seriously and deals with it appropriately.

When asked for a comment about abuse allegations involving the Utah-based faith, a spokeswoman referred The Tribune to official statements on the church’s Newsroom website, where the church states it has a “zero-tolerance policy” for child abuse. “This means that if we learn of abuse,” the statement reads, “we take immediate steps to protect the victim and help them with healing.” It continues, “We cooperate with law enforcement to report and investigate abuse.”

In March, the church updated its policies and noted that «church leaders and members should fulfill all legal obligations to report abuse to civil authorities.”

The Indian Student Placement Program of the LDS Church had a history that goes back to the religion’s beginnings in the early 19th century.

Matthew Garrett, professor of history at Bakersfield [Calif.] College, said the church’s early founders, Joseph Smith and Brigham Young, had programs “to try to save Indians” from apostasy.

In his 2016 book “Making Lamanites: Mormons, Native Americans, and the Indian Student Placement Program, 1947-2000,” Garrett argues that emphasis on redeeming American Indians faded within the church until the 20th century, when Spencer W. Kimball, the faith’s 12th president, started “getting interested in fulfilling some of these overlooked prophecies and expectations.”

His insistence eventually led to the American Indian foster program “with this goal of providing both an education,” Garrett said, “as well as spiritual redemption, conversion to the church, [and] a way to spread the gospel among Native Americans. So it really is a twofold purpose to the program.”

Throughout more than six decades of official and unofficial operation, about 50,000 American Indian students were placed with Latter-day Saint families during the school year.

“Which makes this a huge program,” Garrett noted. “I mean, it’s a massive scale.”

While the program was never officially discontinued, it was gradually phased out beginning in the 1980s. To Garrett’s knowledge, the last student enrolled in the program graduated from high school in 2000.

Typically, those who had a positive experience are American Indians who became active Latter-day Saints and felt like they found a place in Mormon society. Those who speak poorly of the program, on the other hand, feel as though they were robbed of their culture and identity.

And there are also those “people in the middle,” Garrett said, who see both the benefits and detriments to the program.

A church draft report on the Indian Placement Program in 1982 made public by MormonLeaks, a website dedicated to increased transparency in the church, contains allegations of some American Indian children placed in homes sexually abusing their foster siblings. It does not address abuse of American Indian children by their foster parents or siblings.

While child abuse was “relatively infrequent, the devastating impact on these few families should be recognized,” the report said. “It is one of the costs of the program.”

There is no mention in the report as to whether law enforcement agencies or Utah Child Protective Services were notified of the abuse allegations.

In a 2008 Utah State University dissertation by Lynette Riggs on the history of the Indian Student Placement Program, one person interviewed in 2006 said his or her mother “was sexually abused by her foster parents” and later she took her own life. “She left a note indicating that the demons that had haunted her for so many years as a result of all kinds of abuse she suffered at the hands of Mormons were a factor in her suicide,” the person said.

A former foster sibling interviewed told Riggs that she was sexually abused by two boys related to then-LDS leader George P. Lee, who had asked the family to take them in.

“When her parents contacted Lee to have the boys removed from the home,» Riggs wrote, “Lee seemed unconcerned and tried to insist that the boys remain.”

Lee, the first American Indian to become a Latter-day Saint general authority (who as a child had been a participant in the church foster program himself), was excommunicated in 1989 for “apostasy and conduct unbecoming a member.” He pleaded guilty five years later to attempted sexual abuse of a 12-year-old girl who said he used his religious position to coerce her. He died in 2010, and the church never said whether his excommunication was tied to abuse charges.

Riggs, now principal of Mountainside Elementary School in Mendon, Utah, told The Tribune in an email that she did not follow up on the allegations of abuse she uncovered in her research and therefore does not consider herself qualified to discuss them.

After the traumatic abuse baá says she was subjected to during her sixth-grade placement, in 1965-66, and during a physical exam the next school year by an LDS Church-employed physician, she left the foster program for a few years. She returned for her senior year of high school and was placed with a family in Orem.

This time the perpetrator was her foster brother, who was much larger than her, she said.

The first time it happened, baá says in her lawsuit, she “screamed bloody murder at the top of my lungs — and nobody came to my aid. I ran upstairs, I told my foster dad,” but her cries fell on deaf ears.

“Her foster parents said it wouldn’t happen again and proceeded to partially blame her for the rape, saying she turned guys on,» according to the suit. But it did happen again, she says.

On the last of several occasions she says she was raped by her 6-foot-8-inch foster brother, baá “ran back home sobbing to her foster dad, who told her that ‘anything that happens stays in this house,’” according to her lawsuit.

She told her LDS Family Services social worker about the abuse but says no investigation or follow-up took place.

To this day, baá says she remains traumatized, or, as her lawsuit puts it, she «continues to suffer great pain of mind and body.”

«I have had huge psychological issues for the last 54 years of my life. Many issues I have not been able to deal with,” she told The Tribune, adding that she is wracked by anger, despair and depression.

Church leaders, she said, “have no comprehension [of] the hell I was put through as a child.”