A news release provided by the Church details how the Helping Hands program is helping provide relief in Louisana. More than 10 days after Hurricane Laura hit the Gulf Coast as a Category 4 storm, power remains out in many places, and debris is scattered throughout the region.

“When I pulled into the driveway, I started crying. There were trees everywhere,” said Kelli Cowan, a Church member whose home and property were damaged in the storm. She took refuge in Shreveport, Louisiana, until the storm had passed. 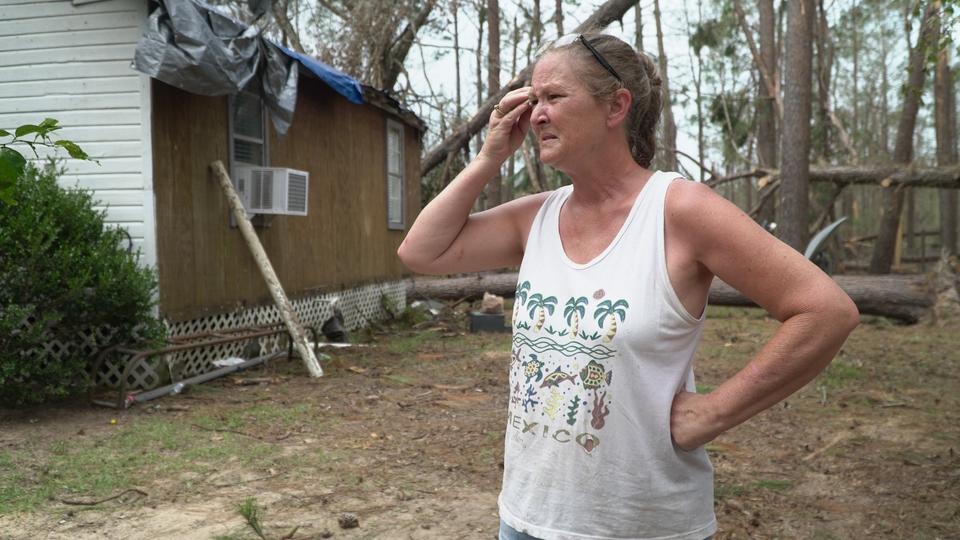 “I have never seen anything like this,” she added. “This was four to five times worse [personally] than [Hurricane] Rita.”

The Gulf region of Texas and Louisiana has been battered by storm after storm.

“We have had four major storms in our stake in the last five years,” said Daniel Harris, president of the Orange, Texas, stake of The Church of Jesus Christ of Latter-day Saints, which includes congregations in Lake Charles, Louisiana.

Church members are not only helping their own, including Cowan, but they are helping people from all walks of life who are in need of a helping hand.

“It is so touching because they’re not only driving, many of them are bringing their own supplies. Many of them are coming early, and even when we say ‘You can stand down this weekend,’ they say ‘No, we are coming back, there are so many people to help,’” said President Harris.

“Thank you, we love you and appreciate you being part of an incredible workforce,” said Elder Art Rascon, an Area Seventy, as he visited volunteers at worksites on Saturday.

Latter-day Saint volunteers—many who have themselves been impacted by severe storms in recent years, including Hurricane Harvey in 2017—have driven more than two hours from Houston to help in the area surrounding Lake Charles. 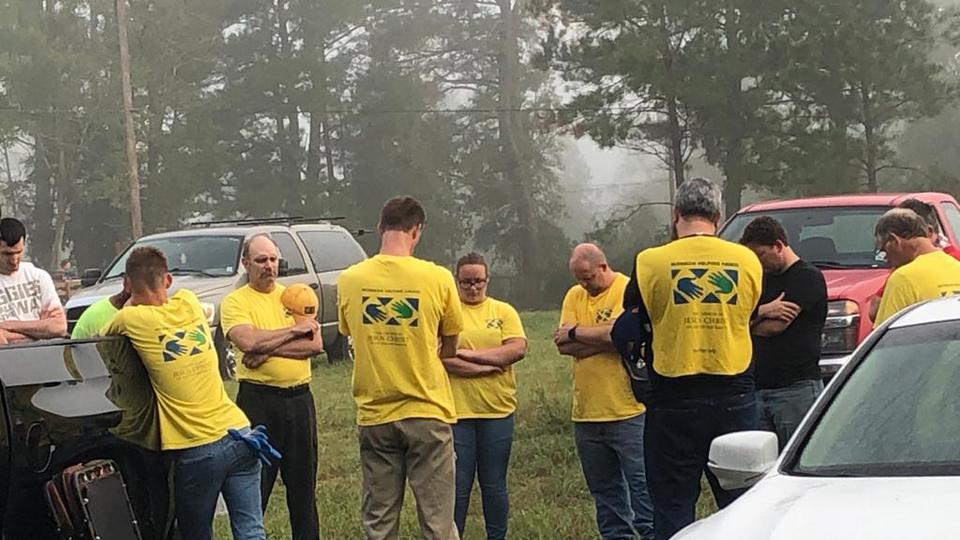 “We have 12 stakes coming, so we have approximately 1,500 men and women, and teenagers as well,” said Elder Rascon.

Following brief sacrament meetings held Sunday morning in various chapels in the surrounding Houston and Beaumont region, volunteers returned for yet another day of service. They are helping in locations throughout Louisiana, as people remain in dire need of assistance to clear debris and protect their damaged homes from rain.

“I’m a senior citizen, and I had no help,” said Gayle Carlson, a widow who lives in Sulphur, Louisiana. “All my neighbors had people coming over to help them, and here I am with nobody. And when you people came, I don’t know, I almost fell to the floor and thanked God for that.”

The volunteers call their Christian service to lighten others’ burdens a blessing. 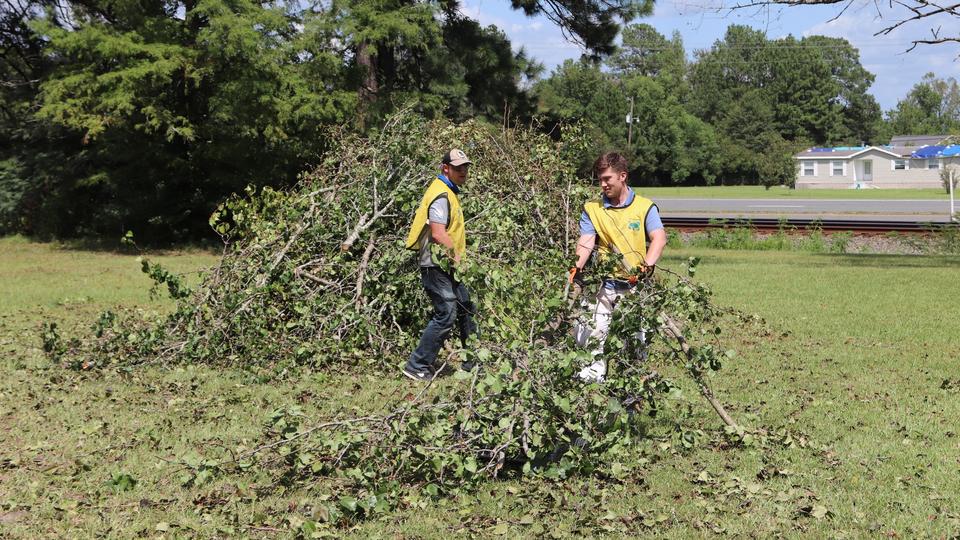 “I am so thankful to have the opportunity to help. It’s not much, but [it’s a blessing] just to come and help others and feel the joy that Jesus Christ talked about in the scriptures and be part of this army, this army of helping others,” said Karina Garcia, a volunteer from Kingwood, Texas, whose husband and 13-year-old son also helped.

Elsewhere in Louisiana, Church-organized relief efforts continued for a second weekend in areas near Rosepine and Monroe.

“The best thing about the day was watching our district all together truly ministering exactly like Christ would,” said Elder Levi Teare, a full-time missionary and Helping Hands volunteer.

This was the second weekend in a row Latter-day Saint volunteers in their trademark yellow shirts and vests mobilized in Louisiana to help in the recovery efforts. More than 350 volunteers provided 4,028 man-hours and completed 100 Crisis Clean-up Hotline work orders in the DeRidder, Leesville, Many and Alexandria communities of Louisiana. 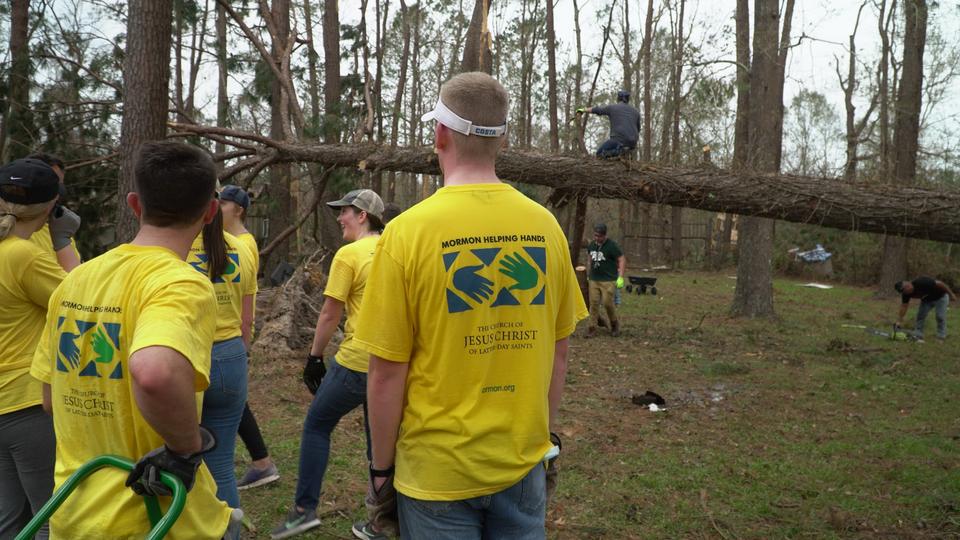 Chainsaws, hand trucks, debris sleds, tarps, food boxes, water and other tools needed to aid victims of the storm have been shipped to the sites by the Church’s global humanitarian organization, Latter-day Saint Charities.

“Today was probably one of the hardest things I have ever done, but I would do it again in a heartbeat,” said Sister Alyna John, who is serving as a missionary in the area. “Seeing all the destruction to people’s homes was devastating. It was a humbling experience to get the opportunity to help.”

Community partner Dianna Corley donated burgers and chicken to the volunteers. She said, “This is God’s blessing. He knows where the food is needed. He has a way of getting things done.”