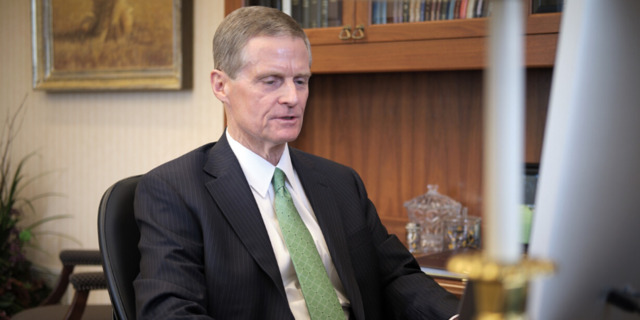 In an address given Wednesday, June 17, 2020, Elder David A. Bednar of the Quorum of the Twelve Apostles said the COVID-19 crisis is a wake-up call for religious freedom.

Elder Bednar was the keynote speaker at the Religious Freedom Annual Review, hosted by BYU Law. The topic this year was “Religion and Religious Freedom in the COVID-19 Era: Finding Community and Hope.” This year’s review is being broadcast on YouTube from 10–11 a.m. MDT from June 17–19.

Elder Bednar’s remarks are available in the video below, and a summary is provided after the video.

“And When He Came to Himself”

Elder Bednar’s titled his remarks, “And When He Came to Himself,” a reference to Luke 15:17. Luke chapter 15 shares the parable of the prodigal son. In the parable, a son had obtained an inheritance from his father and then left home to waste the inheritance with riotous living in far country. When a famine hit, the son found himself “in want” and decided to go back to his father, which ultimately led to their reconciliation.

Like the prodigal son’s wake-up call, Elder Bednar discussed the wake-up calls we have recently experienced.

“Our world has seemingly been filled recently with strong wake-up calls,” Elder Bednar said. “From natural disasters to a deadly pandemic sweeping the globe to a most pernicious social plague of racism, we are daily reminded that we need to awaken to the perilous times that surround us, come to ourselves, and arise and turn to our Divine Father who desires to instruct and edify us through our trials.”

Elder Bednar noted that just as the famine acted as a wake-up call for the prodigal son, COVID-19 can help us realize what we have not fully realized before. He then shared a poignant video, “The Great Realisation.”

Elder Bednar explained “constraints and limitations can be remarkable blessings if we have eyes to see and ears to hear” and shared some of the things we “may now see and hear more distinctly because of the demands and constraints imposed upon us by COVID-19,» like the limitations of the supply chain process, the deficiencies in our national and local healthcare systems, and the many attacks on the freedoms of religion, speech, and assembly.

“And the list goes on,” Elder Bednar said. “The buzzer on the COVID-19 alarm clock just continues to ring and ring and ring.”

Elder Bednar said that the Annual Review is a time to reflect on religious freedom and “doing so in the midst of COVID-19 sharpens our focus.”

“This present crisis may well be a moment when we too come to ourselves and realize, perhaps as never before, just how precious and fragile religious freedom is,” Elder Bednar said.

Religious Freedom and the Importance of Gathering

One key realization, according to Elder Bednar, is that for most faith communities, gathering for worship, fellowship, and ritual is essential.

“Being in each other’s presence is a unique and irreplaceable experience,” Elder Bednar said. “In Christianity, the God of the Old Testament came to His people in the flesh. Jesus Christ touched people, embraced them, healed them, ministered to them, and we believe we are called to do as He did. He taught where ‘two or three are gathered together in my name, there am I in the midst of them.’ (Matthew 18:20)”

Elder Bednar noted that the need to gather was not strictly limited to the Latter-day Saints as a religious community, noting that friends in the Catholic, Orthodox, Protestant, Evangelical, Jewish, Muslim, Buddhist, and Sikh traditions also have needs to gather for religious worship.

Elder Bednar continued, “I believe it is vital for us to recognize that the sweeping governmental restrictions that were placed on religious gatherings at the outset of the COVID-19 crisis truly were extraordinary. In what seemed like an instant, most western governments, and many others, simply banned communal worship. These restrictions eliminated public celebrations of Easter, Passover, Ramadan, and other holy days around the world. No other event in our lifetime—and perhaps no other event since the founding of this nation—has caused quite this kind of widespread disruption of religious gatherings and worship.”

Elder Bednar noted that governments have an affirmative duty to protect public health and safety and said that he believes public officials have most often sought to do the right things to protect the public from the virus.

“Drawing proper lines to protect both public health and religious exercise in a pandemic is very challenging, but we cannot deny, and we should not forget the speed and intensity with which government power was used to shut down fundamental aspects of religious exercise,” Elder Bednar said. “These decisions and regulations were unprecedented. For nearly two months, Americans and many others throughout the free world learned firsthand what it means for government to directly prohibit the free exercise of religion.”

Relating the experience of the prodigal son who “came to himself” in the midst of crisis, Elder Bednar shared, “Our own time of being in want invites us to carefully reflect on fundamental principles that perhaps we have long taken for granted.” He then shared a few of his own reflections.

1. “Government power can never be unlimited.”

Elder Bednar explained, quoting the Declaration of Independence, that in our political system, the government derives its just powers from the consent of the governed.

“But the just powers of government cannot be unlimited because they exist most fundamentally to secure the God-given rights of life and liberty so that each of us can exercise our moral agency, the ability to act for ourselves and not to be acted upon, and to be accountable before God for our choices and access,” Elder Bednar said. “Constitutions, representative government, checks and balances, and the rule of law, help constrain the tendency of government to exercise unlimited power. But of course, liberty also has limits.”

He continued to explain that government provides a role in fostering a moral environment where people can live good and moral lives, but they also have to remember that their offices and powers exist to secure our fundamental freedoms and the conditions to exercise our freedoms.

“Thus, despite the obvious need for a proper response to COVID-19, we must not become accustomed to sweeping assertions of governmental power,” Elder Bednar said. “Invoking emergency powers, government executives summarily imposed numerous orders and directives that in many ways are analogous to martial law. These executive orders are unlike laws enacted through the ordinary give-and-take of the democratic process. No doubt an emergency on the scale of COVID-19 justifies strong measures to protect the public, but we cannot lose sight of the fact that many of these measures are extraordinary assertions of governmental power that can dramatically constrain our basic freedoms. The power of government must have limits. “

2. “Religious freedom is paramount among our fundamental rights.”

“This time of restriction and confinement has confirmed for me that no freedom is more important than religious freedom,” Elder Bednar said.

Elder Bednar explained that freedom of religion draws from and reinforces the other rights in the First Amendment: to speak freely, to make use of the free press, to peaceably gather with others, and to petition of the government to redress grievances.

“Freedom of religion stands as a bulwark against unlimited government power,” Elder Bednar said. “It safeguards the right to think for oneself, to believe what one feels to be true, and to exercise moral agency accordingly. It secures the space necessary to live with faith, integrity, and devotion. It nurtures strong families. It protects communities of faith and the rich and sacred relationships they make possible. Nothing government does is more important than fostering the conditions wherein religion can flourish.”

“As we have just experienced, religious freedom can quickly be swept aside in the name of protecting other societal interests,” Elder Bednar said. “Despite COVID-19 risks, North American jurisdictions declared as essential numerous services related to alcohol, animals, marijuana, and other concerns, but often religious organizations and their services were simply deemed ‘nonessential’ even when their activities could be conducted safely. In the name of protecting physical health and security or advancing other social values, government often acted without regard to the importance of protecting spiritual health and security. It often seemed to forget that securing religious freedom is as vital as physical health.”

4. “In a time of crisis, sensitive tools are necessary to balance the demands religious liberty with the just interests of society.”

Elder Bednar gave an example of how in one state, Catholic priests were barred from anointing a parishioner with holy oil in the performance of last rights, even if the person was not sick with COVID-19, even if the priest and parishioner both wore masks and gloves, and even if the oil was applied with a swab. In the same state, Latter-day Saint baptisms were prohibited even under the safest of conditions.

Elder Bednar said we must always remember a second essential principle: “Policymakers even in a crisis should limit the exercise religion only when it truly is necessary to preserve public health and safety. When the needs of society are great, officials should still ask whether there is some way of addressing those needs other than by burdening or banning the exercise of religion. With goodwill and a little creativity, ways can almost always be able to found to fulfill society’s needs and the imperative to protect religious freedom.”

Elder Bednar said the COVID-19 crisis has given us a “unique opportunity to reaffirm and sure up religious freedom.”

“We have witnessed the government’s swift, well-intentioned but often dangerous breaching of the boundaries that protect the free exercise of religion,” Elder Bednar said. “Do we hear the buzzer on the alarm clock? This is a wake-up call for all of us. Those fundamental boundaries and protections must be healed, renewed, and fortified. While believers and their religious organizations must be good citizens in a time of crisis, we cannot allow government officials to treat the exercise of religion as simply, ‘nonessential.’ Never again must the fundamental right to worship be trivialized below the ability to buy gasoline.”

Elder Bednar concluded by drawing another parallel to the story of the prodigal son.

“In the midst of crisis, the prodigal son in the Biblical parable came to himself and began the long journey back to his home. No doubt, in that moment, he realized the error of his ways, but more fundamentally I think he also realized that he had forgotten who he was. There among the swine, he remembered and then everything changed. In our understandable desire to combat COVID-19, we too as a society may have forgotten something about who we are and about what is most precious. Perhaps we have not fully remembered that faith, and the right to exercise it, are central to our identity as believers and to all that we deem good and right and worthy of protection. Now is the time for us to heed the wake-up call, to remember and to act.”

The full session is available for viewing in English, Spanish, and Portuguese on the BYU Religious Freedom website.