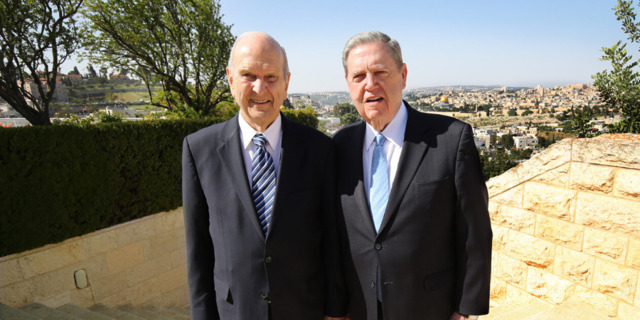 Speaking at the 2020 Mission Leadership Seminar, Elder Jeffrey R. Holland noted the seminar marked 176 years since the martyrdom of the Prophet Joseph Smith and his brother, Hyrum.

Part of the final hours of these two brothers adds to Elder Holland’s conviction of the veracity of the Book of Mormon, and that event occurred on June 26—the same day Elder Holland spoke to the audience, as reported by Church News.

In Carthage Jail on June 26, 1844, Hyrum Smith opened the Book of Mormon and likely read, “And it came to pass that the Lord said unto me: If they have not charity it mattereth not unto thee, thou hast been faithful; wherefore, thy garments shall be made clean. … And now I … bid farewell unto the Gentiles, yea, and also unto my brethren whom I love, until we shall meet before the judgment-seat of Christ, where all men shall know that my garments are not spotted with your blood” (Ether 12:36–38).

Elder Holland explained that no one who was about to face their Maker would turn to a book of their own creation, seek eternal consolation from it, and quote from it as the last testament they would give in mortality.

“These men do not say what a joke they have played,” Elder Holland said. “They do not laugh about how many people they have fooled. They do not smirk and say the fable has ended; the travesty is over. No, with the Book of Mormon in their hands and an expression of charity on their lips, these two prepare to stand before the judgment seat of Christ. Every element of this tragic experience cries ‘truth, truth, truth.’”

Elder Holland said that testimony, “offered in that setting, read on the very eve of death, is one of the 10,000 reasons I know the Book of Mormon is true.”