This excerpt originally ran on LDS Living in December 2019.

After serving as an Apostle of the Lord and studying the names of Christ for 25 years, Elder Jeffrey R. Holland’s new book, Witness for His Names, shares some insights into the various names of Christ. Here are just a few.

This word means literally “My Lords.” It is the plural form of adon or Lord. It is one of the principal Hebrew synonyms for Jehovah, used in the Hebrew Bible more than 430 times to refer to the Divine Being of the Old Testament, He who would later be born into mortality as Jesus Christ.

Crown of Glory/Diadem of Beauty

In the last days, when groping people and false prophets, “through wine, and through strong drink, . . . err in vision, [and] stumble in judgment” (Isaiah 28:7), the Lord of hosts shall intervene victoriously, being “a crown of glory, and . . . a diadem of beauty” (Isaiah 28:5) in the land. Crown and diadem are synonyms, with the former often being made of metal while the latter is often a band of cloth. Both usually carry precious gems, and both convey a sense of royalty or victory achieved in competition. The suggestion here is that people will desperately need leadership in the last days, which the Messiah will both royally and victoriously provide. We are reminded of the poignance of Christ’s Atonement when we remember that a “crown of thorns” (Matthew 27:29) was mockingly placed on His head following His night of interrogation and on through His Crucifixion.

Framer of Heaven and Earth

Framer could justifiably be considered simply a synonym for Creator, as it is in a phrase like “framers of the Constitution.” This is a perfectly satisfactory explanation of this title. However, a framer in an earlier era of construction was always a carpenter, a craftsman who fashioned the exterior and interior walls, rooms, and hallways of a home or shop by the upright timbers he put in place that gave the structure its shape and dimensions. Perhaps there is special meaning in the fact that the carpenter’s son from Nazareth was a framer long before He came to earth to learn building skills in His foster father’s shop. A framer can also be one who brings definition and completeness to a project, as one who frames a piece of art—another apt description of the Savior’s work.

This unique phrase from Jeremiah suggests not only that Jehovah is just but also that the very environment in which He reigns and the atmosphere in which He rules is characterized by justice. His people can be confident, safe, and forthcoming in His presence, knowing their judgment will be just, whatever His ruling as judge might be.

Minister of the Sanctuary

This suggests Christ’s priestly role in temples, both ancient and modern, and underscores His relationship with saving ordinances generally. His is a “more excellent ministry” (Hebrews 8:6) devoted to those He came to save. We could all do more to revere the time we have worshipping Him in the sanctuary, the sacred space of our buildings.

Nail in a Sure Place

In a moving Messianic tribute, Isaiah prophesied of Christ’s mission and Crucifixion with these words:

“And I will clothe him with thy robe, and strengthen him with thy girdle, and I will commit thy government into his hand: and he shall be a father to the inhabitants of Jerusalem, and to the house of Judah.

“And I will fasten him as a nail in a sure place; and he shall be for a glorious throne to his father’s house.

“And they shall hang upon him all the glory of his father’s house, the offspring and the issue, all vessels of small quantity, from the vessels of cups, even to all the vessels of flagons.

“In that day, saith the Lord of hosts, shall the nail that is fastened in the sure place be removed, and be cut down, and fall; and the burden that was upon it shall be cut off: for the Lord hath spoken it” (Isaiah 22:21–25, emphasis added).

When the Roman soldiers drove their four-and-one-half-inch crucifixion spikes into their victim’s flesh, they did so first in the open palm. But because the weight of the body might tear that flesh and not sustain the burden to be carried, they also drove nails into the wrist, down in the nexus of bones and sinews that would not tear no matter what the weight. Thus, the nail in the wrist was the “nail in a sure place.” Once it was removed and the Savior was “cut down,” the burden of the crucified body (more literally, the burden of the Atonement) was brought to an end. In terms of our salvation, Christ is the Nail in a Sure Place—never failing, never faltering, ever the most certain and reliable force in eternity. For this, we surely “hang upon him all the glory of his father’s house.”

This title is seldom used in modern times but was very common in some cultures anciently, referring to those who held office as a ruler or monarch. It takes its meaning from the word power, drawing upon a common root with other related words such as potent and potential.

In the book of Genesis, the coming of the Lord is referred to as the coming of “Shiloh” (Genesis 49:10). That reference might be unclear were it not for the Joseph Smith Translation, which offers this interpretation, “Messiah who is called Shilo” (JST, Genesis 50:24). Although the actual meaning of the word Shiloh is debated, we know it was the name given to an ancient city in Samaria, the major Israelite worship center before the building of Solomon’s temple. Some linguists think the word means “peace.” 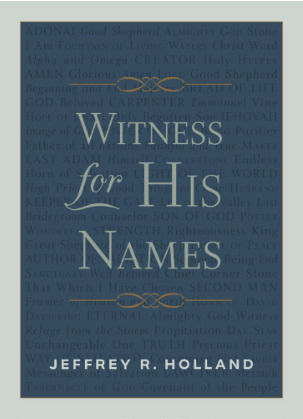 In this beautiful book, Elder Holland shares his notes and insights about the many names of Christ he has studied in his years as an Apostle. He promises that «as we study these titles to learn more about who He was and is, we will find ourselves learning more about who we are and what we may become.» In doing so, we will gain a greater understanding of our covenants and how each of us can more fully bear witness of Christ’s holy name. Explore more insights into the many names of Christ in Witness for His Names, available at DeseretBook.com.