Editor’s note: Our bi-weekly Friday column, “Found in the footnotes,” explores some of the footnotes from remarks given by General Authorities and General Officers of The Church of Jesus Christ of Latter-day Saints.

In a devotional for BYU-Pathway Worldwide earlier this week, Sister Michelle D. Craig, First Counselor in the Young Women General Presidency, asked a question that prompted me to pause:

“The Salt Lake Temple took 40 years to build! The pioneers experienced many setbacks, and the process was slow and grueling. What if those pioneers had given up? What if they said, ‘This is just too hard’ and quit?”

In his October 2020 general conference address, Elder Dieter F. Uchtdorf talked about one of the setbacks these pioneers faced: burying the temple foundation out of fear of persecution.

In his book, Forty Years: The Saga of Building the Salt Lake Temple, Mark Henshaw details the work that had gone into building that first foundation:

Five years ago, the Saints had dug up more than 80,000 tons of dirt to open the trenches for the cornerstones and foundation. Meeting the six-week deadline for the cornerstone ceremony had required hundreds of workers to haul away some 1,900 tons of dirt almost every day from the middle of February to early April. That was just to open the four trenches for the walls. Now the Saints would have to haul a significant portion of that dirt back to the temple block, plus what they’d excavated from the square between the walls. Nor did they know how long they had to complete the job. It was March now. The snows would begin to melt soon, and when they did, Johnston’s army would start to move. So the Saints would have to haul more dirt in less time than ever before, and they would have to do it while they were making their other preparations to abandon the city.

The foundation was buried. The army came. The army left. The temple foundation was supposedly safe. Yet, once the time came around to uncover it, the sandstone had cracked making it unsuitable for the foundation. As Elder Uchtdorf said in conference, “I’m sure some members of the Church wondered why their efforts to build God’s kingdom were constantly being frustrated.”

But they rebuilt. They started over. And then, “finally, the Saints could sing the hymn ‘How Firm a Foundation’ and know their holy temple was built on a solid foundation that would last for generations,” as Elder Uchtdorf said.

► You may also like: 10 things you didn’t know about your favorite Latter-day Saint hymns 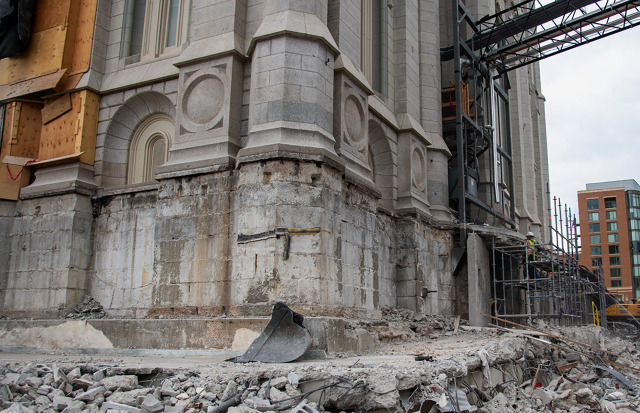 That foundation was recently uncovered as part of the Salt Lake Temple renovation, and it indeed has lasted for generations. In a footnote, Elder Uchtdorf notes that the verses of “How Firm a Foundation” “can serve as a theme for our times, and when we listen to the lyrics with new ears, it provides insight into the challenges we face,” and then includes a few verses of the hymn, including some of the lesser-known verses (four, five, and seven). As I read through these lyrics in some of those verses that I don’t recall ever singing in a meetinghouse pew, I saw interesting parallels to our current challenges:

Perhaps the lyrics that stood out to me the most were in verse four, “Thy troubles to bless, and to sanctify thee . . . thy deepest distress.” It made me wonder, am I allowing the trials brought on by these times to sanctify me?

Maybe these times are allowing us, like those pioneer Saints, to see where our foundation needs repair. In her devotional, Sister Craig shared this thought:

The temple foundation is being strengthened by pumping in a special concrete to fill in any cracks that may have been left during the original construction or that have developed over the years. . . . There are cracks in all of our lives, challenges that perhaps no one else can see. These cracks can be filled in as we repent—cracks that can be filled in because Jesus Christ atoned for every one of our sins and shortcomings, because His grace can make us whole. Actually, repentance is not just about fixing cracks but making us stronger and better than we were before, just like the temple.

By turning to Him, our cracks can be filled and we, like those pioneer Saints, can also sing “How Firm a Foundation,” knowing the Lord will uphold us with His “righteous, omnipotent hand.”

Forty Years: The Saga of Building the Salt Lake Temple, written by master storyteller Mark Henshaw, tells the narrative of the building of that iconic temple—a place of worship and refuge forty years in the making. Available now at DeseretBook.com.