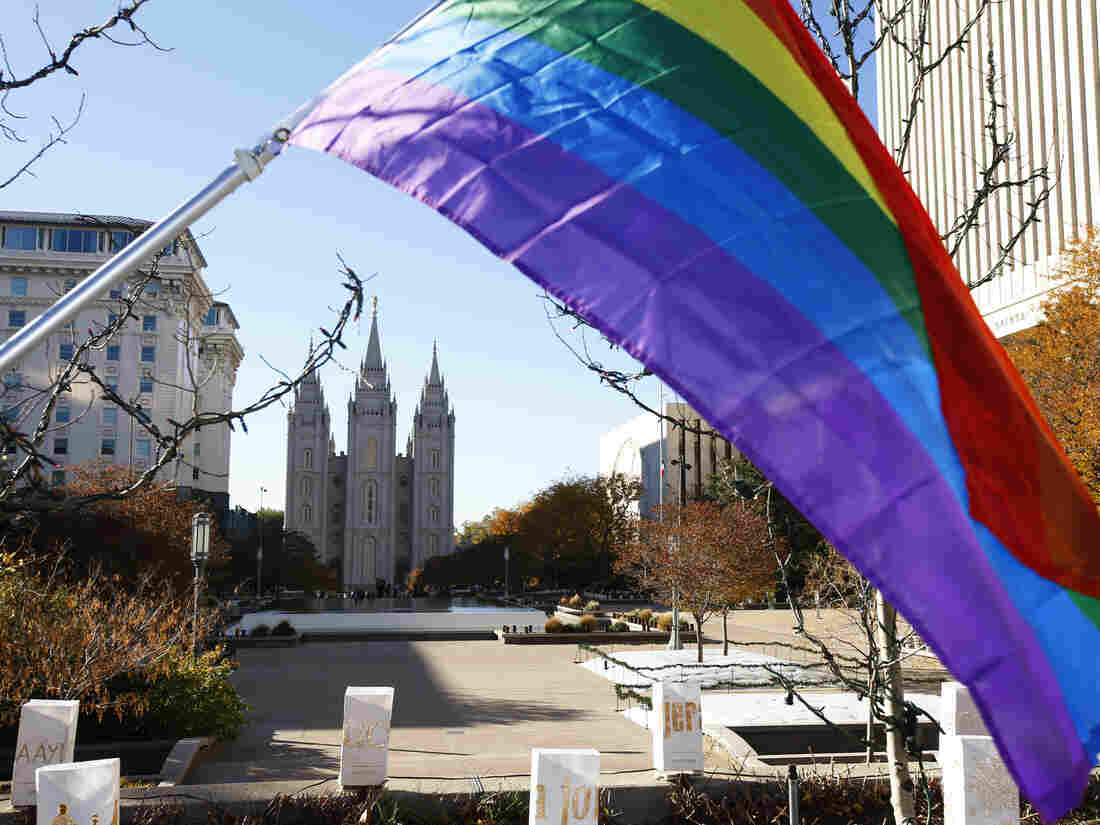 The Church of Jesus Christ of Latter-day Saints announced Thursday that it will no longer consider people in same-sex marriages to be apostates. Here, a pride flag flies in front of the Historic Mormon Temple in Salt Lake City as part of a 2015 protest of the church’s LGBT policies. George Frey/Getty Images hide caption 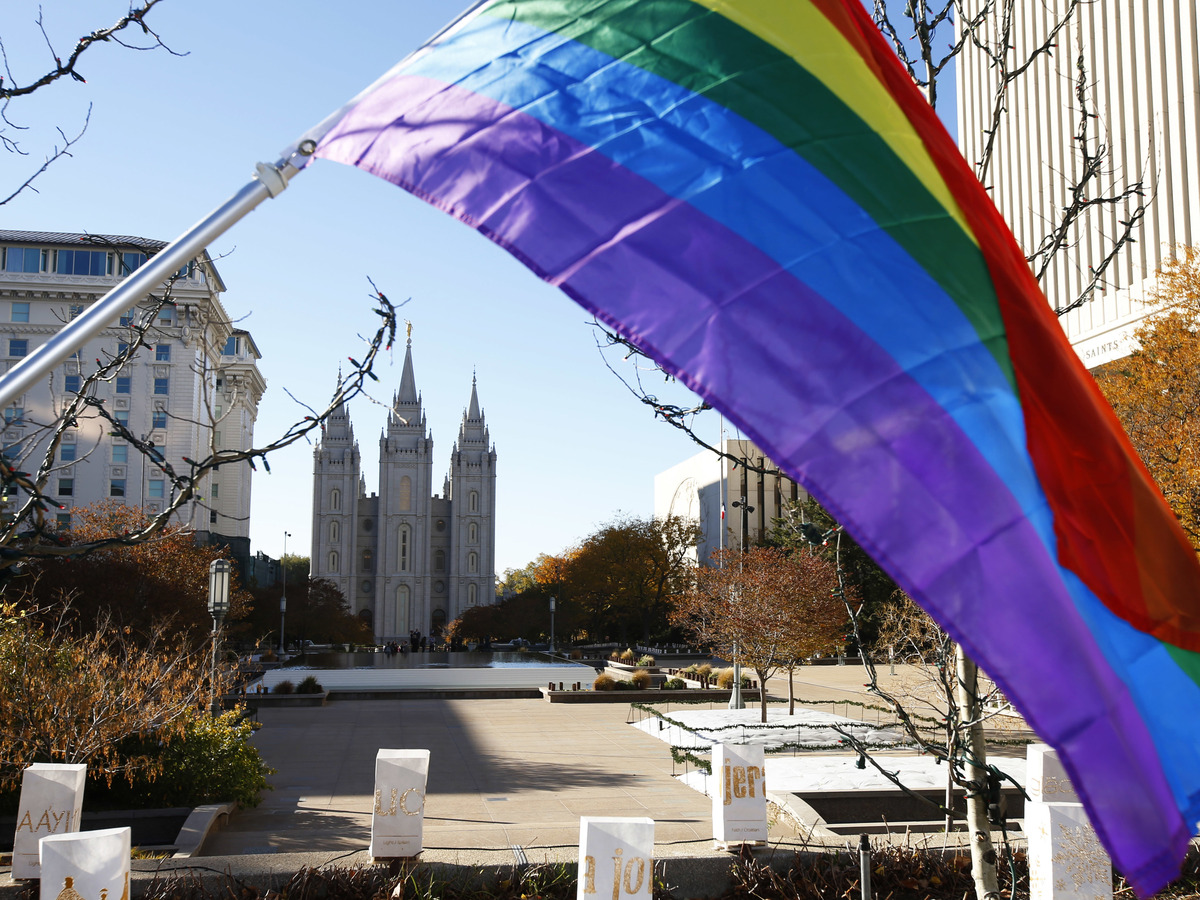 The Church of Jesus Christ of Latter-day Saints announced Thursday that it will no longer consider people in same-sex marriages to be apostates. Here, a pride flag flies in front of the Historic Mormon Temple in Salt Lake City as part of a 2015 protest of the church’s LGBT policies.

The Church of Jesus Christ of Latter-day Saints announced on Thursday that it was reversing its controversial 2015 policy that classified people in same-sex marriages as «apostates.» The church, widely known as the Mormon church, had also barred the children of such marriages from blessing or baptism until age 18.

The change was attributed to President Dallin Oaks, and the church said it was intended to «help affected families» and «to reduce the hate and contention so common today.»

Children of parents who identify themselves as lesbian, gay, bisexual or transgender may now be blessed as infants and baptized.

The 2015 policy had divided the church, and many members felt it punished children. The children of such marriages could only be baptized once they turned 18, and to do so they needed to move out of the household and disavow same-sex cohabitation and marriage. In protest, at least 1,000 members of the faith showed up in Salt Lake City to formally resign their membership.

The move may be seen as loosening a highly restrictive approach to its LGBT members, but the church reiterated that it considers same-sex marriage by a member to be «a serious transgression.»

«While we cannot change the Lord’s doctrine, we want our members and our policies to be considerate of those struggling with the challenges of mortality,» the church said in its message, released during a general conference leadership session of the First Presidency in Salt Lake City.

A news release issued by the church attributed the policy change to «continuing revelation.»

The church said that «immoral conduct in heterosexual or homosexual relationships will be treated in the same way.»

But some took issue with that line, as the LDS church does not recognize same-sex marriage as being the same as a heterosexual marriage, which it calls «eternal marriage.»

The Trevor Project, a suicide prevention and crisis intervention organization for LGBTQ young people, said it welcomes any faith group’s public commitment to treating the LGBTQ community fairly and equally.

«[T]his statement by the LDS Church to change course is a move in the right direction that will make a real difference in the lives of LGBTQ Mormons,» said Sam Brinton, who leads the group’s advocacy and government affairs. «We hear from LGBTQ young people in crisis every day who struggle to reconcile being part of both the LGBTQ and faith communities, and decisions to end policies of exclusion can help LGBTQ youth feel seen, loved, and less alone.»

On Twitter, there was an outpouring of all kinds regarding the change in policy. Some LGBTQ members thought it was a sign of progress and hope.

«That is how LGBTQ Equality will work in the church; nothing, a glimmer, and then all at once the sun will be up & we will wonder how on Earth we ever saw anything different This is a wonderful day to be alive!!!» wrote Calvin Burke, who is gay and a student at Brigham Young University, which is operated by the LDS church.

I know there will come a point in my life when I will stand with my fellow Saints & be able to say that I have not been denied any blessings now or in Eternity because I am gay.

Some wrote of the pain that the policy had caused.

«When this policy came out I stood [in] the conference center with my mother. She looked around and said, ‘My family worked to build this and it should belong to all of them.’ She broke down crying and has since left the church,» Braidan Weeks tweeted. «The pain that has already happened can’t be undone. I hope that the church truly wants to heal with the communities of Utah. Because even those of us that are no longer members helped build the church to what it is. We care about this state and its people. Cheers to hope.»

The church says the new policies are being sent to its leaders worldwide and will be included in online updates to its handbook.

In the church’s news release, President Henry Eyring said that «we need the Lord’s direction to meet the changing circumstances, and He has guided changes in practice and policy through the history of the Church.»