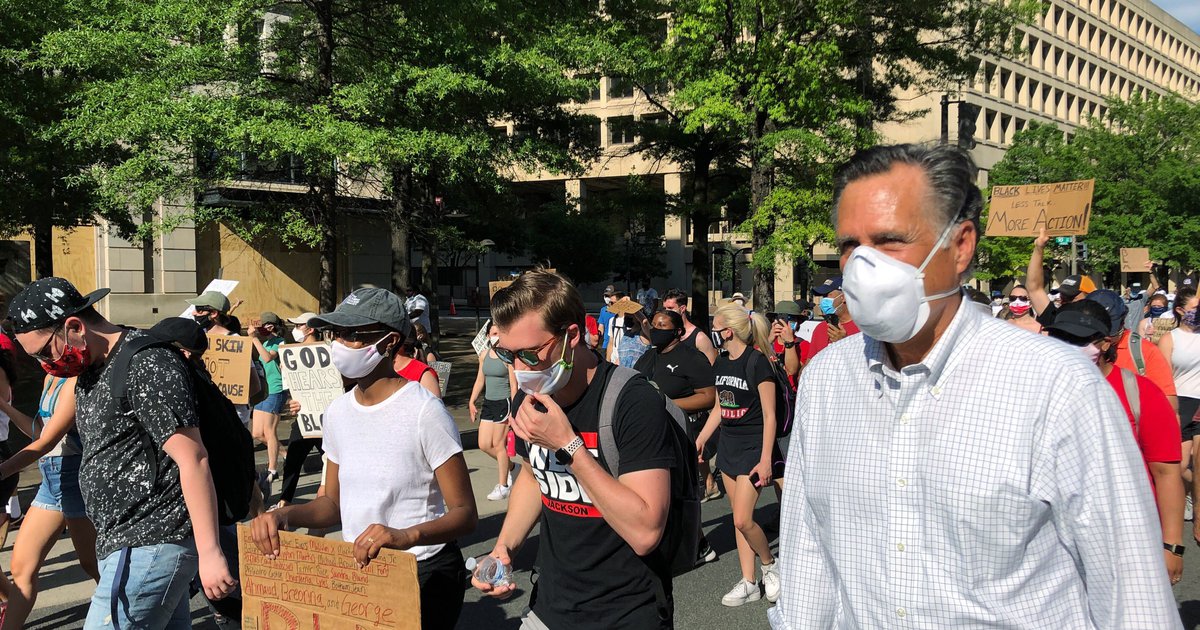 Mitt Romney’s participation in a racial justice march Sunday brought the startling sight of Republicans’ 2012 presidential nominee avowing that “black lives matter” — a rare statement for a federal lawmaker in his party. But it also illustrated the key role faith groups are playing in propelling the nation toward action against police brutality.

The march the Utah senator joined was organized by Christian churches in the Washington area and, according to attendees, drew more than 1,000 people behind a message that was consciously not aligned with either political party. Romney’s selfie posted from the crowd showed marchers carrying signs that rooted their call for racial equality in the Bible, rather than directing fury at President Donald Trump.

The church-backed march, which began in southeast Washington and ended at the White House, was one of many religious demonstrations in favor of action against racism that have taken place since the police killing of George Floyd in Minneapolis. As that diffuse movement enters its second week, Romney’s march alongside faith leaders was a reminder of the moral weight they can bring to the broader debate over how to heal a fractured country.

“I’m grateful to anyone that wants to join in, particularly because of this distinctively Christian response to racial injustice,” Perrin Rogers, pastor at The Triumphant Church in Mt. Rainier, Md., said of Romney’s presence, adding that he found it encouraging and surprising.

Rogers said he only realized the GOP senator had joined the march after it was over. The pastor said the presence of “other people of faith” might have provided “a safe space to join in,” and he hopes Romney will follow through by backing action on criminal justice reform.

“I’m hopeful that his presence is not just one for him to have a nice tweet or something like that online, but that it would lead to change in places it should really change, which is legislation,” Rogers said.

Romney told reporters Monday that he is talking with some fellow Republicans about a police reform proposal that could win bipartisan backing. He described the “great majority” of law enforcement officers as unbiased in their work.

In video posted on social media by NBC News and other outlets, Romney is shown in a white mask and checkered button-down shirt, saying he joined the crowd because “we need many voices against racism and against brutality. We need to stand up and say that black lives matter.”

His participation harkened back to the legacy of his father, former Michigan Gov. George Romney, who marched alongside civil rights demonstrators in his home state in the late 1960s.

Romney’s office did not tell organizers he would be joining, according to an aide who spoke on condition of anonymity in order to discuss internal planning. While his presence at a faith-driven march was a matter of timing rather than a deliberate choice, it underscored the influence that Romney’s own faith has had on his decision-making on moral matters.

“No doubt one reason why Mitt Romney felt he could safely march with them is, it’s a different kind of group than if he was marching with Black Lives Matter,” said David Campbell, chair of the political science department at the University of Notre Dame. «I personally think the fact that you’re seeing mobilization across religious groups, that speaks to how significant this moment is.»

The march’s relatively nonpartisan nature didn’t keep Romney from being the target of an online dig from the president, whom he voted to convict on abuse of power charges at the Senate impeachment trial earlier this year. Trump tweeted about Romney’s “sincerity,” with evident sarcasm, adding: “Hard to believe, with this kind of political talent, his numbers would ‘tank’ so badly in Utah!”

Romney, the first major-party presidential nominee who is a member of The Church of Jesus Christ of Latter-day Saints, partly grounded his decision to become the only GOP senator supporting Trump’s removal from office in his faith. His move rattled some voters in his conservative state, but it remains unclear whether Romney would suffer political consequences for a vote against Trump assuming he seeks reelection in 2024.

About two-thirds of Latter-day Saints voted GOP in the 2018 midterm elections, according to a nationwide AP survey of midterm voters, but Trump’s job approval among voters from the church trailed that number. The VoteCast survey also found 64% of Utah voters wanting to see Romney confront the president.

The church has a complicated history on racial equality, having barred African American men from becoming priests until 1978. But its current leadership has spoken out after Floyd’s killing, and its president published a Monday op-ed calling for governmental and individual action against racism alongside leaders of the NAACP.

A church spokesman referred a request for comment on Romney’s participation in the march to the senator’s office.