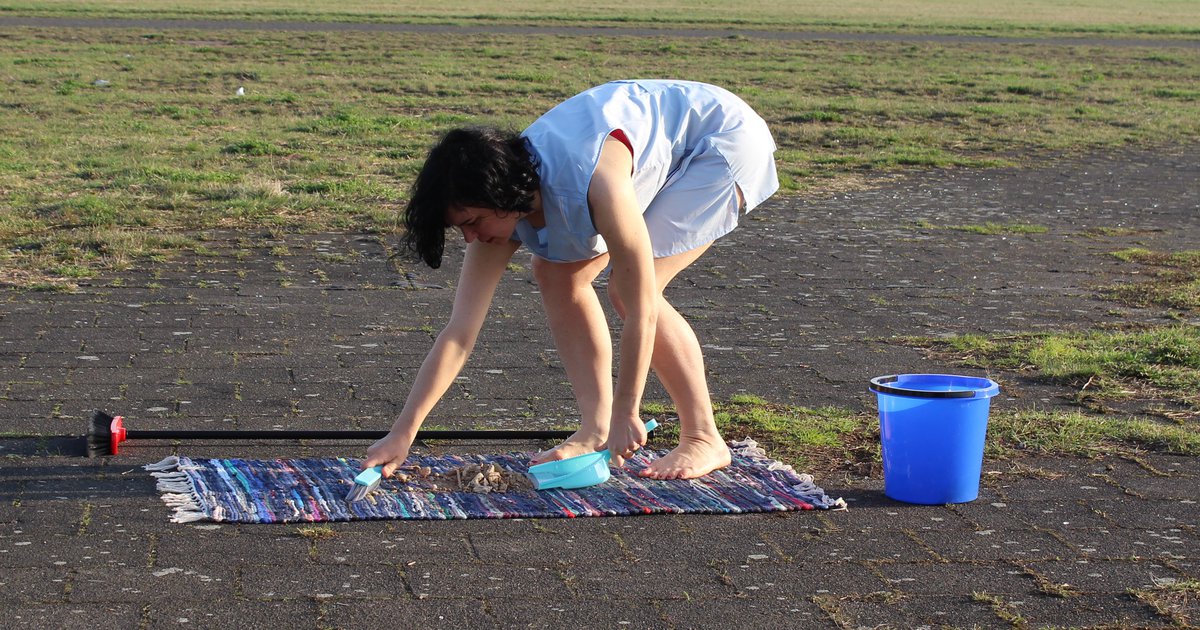 A woman sweeping a rug is a common occurrence in homes around the world.

A woman sweeping the same rug for 4½ hours, on the edge of Salt Lake City’s Temple Square during the semiannual General Conference of The Church of Jesus Christ of Latter-day Saints, is something else.

For Michelle Standley, the performance is art — and the start of a conversation about domestic labor. When she conceived it, she said, “it was an expression of my own experience as a single mom and, even before I was a single mom, the labor involved in housework and the isolation of it.”

Standley was raised in the Latter-day Saint faith, but “when I first thought of the piece, I wasn’t thinking about Mormons at all. It seemed completely separate,” she said last week, over Skype from Berlin. (She splits her time between Berlin and New York.)

In “4.5 Hours,” which is billed as “a public enactment of a private ritual,” Standley carefully and silently sweeps dirt off a small rug. She brushes the pile of dirt into a dustpan, then pours the dustpan into a bucket. When all that is done, she pours the contents of the bucket back onto the rug, and repeats the process over and over.

The amount of time Standley sweeps represents the average time in a day, worldwide, a woman performs unpaid labor — including laundry, grocery shopping and child care — according to data from the Organization for Economic Cooperation and Development, an international policy group. The 4.5 hours women worldwide perform domestic labor is double what men do on average, the OECD found.

She has performed the work twice before, both in Berlin — in April 2017 at the decommissioned Tempelhof Airport, and June 2018 in front of the library at Humboldt University. The performance at Temple Square will be Standley’s first time doing the work in the United States.

Standley has scheduled the performance of “4.5 Hours” for Sunday, Oct. 6, from 10:30 a.m. to 3 p.m., on the southern edge of Temple Square — during the second day of General Conference.

Although she no longer belongs to the church, she said, in her work “there’s something positive about the connection with Mormons.”

She recalled many times when her mother’s side of the family volunteered for church projects in Southern California. “Working together on something, and there was a joy in that, [a joy] that can’t be experienced when labor is left to the individual to perform on their own,” she said.

Standley tries to add local touches to performances, such as buying her housedress at a Salt Lake City secondhand store. “There’s a story behind the thing I’m wearing. I don’t know what the story is, but some woman wore it,” she said. “I want the material objects to be connected to the place.”

Reactions to her past performances have been positive and negative, she wrote in an essay last year. Sometimes men “were communicating their disapproval” with passive aggressiveness, snickering or putting their bags on top of her explanatory postcards, which she places nearby to describe the work to spectators. Once, a man “grabbed my broom, and swept up in hostile silence the remnants of dust remaining on the ground, then marched off.”

On the other hand, Standley wrote, some gave encouragement. Most meaningful, she wrote, was a young woman who came up to her in the restroom after the library presentation to tell her, “Thank you so much for your performance.”

Standley still has to scout the exact spot for her performance, as she follows city regulations about where she can stand near Temple Square without blocking foot traffic. Standley said she has a busker’s permit; The Salt Lake Tribune’s attempts to confirm that with Salt Lake City officials were unsuccessful. She’ll also have friends watching from a distance, and a videographer to capture the performance.

Standley chose Temple Square during General Conference because “symbolically, this is the center of the church.” She also felt a time crunch, because the Salt Lake Temple and Temple Square will close for a four-year renovation project starting Dec. 29.

She said she didn’t choose Temple Square to start a fight with Latter-day Saints. “It’s not just a provocation to point the finger, just to say, ‘Oh, no, you’ve got it all wrong,’” she said. “Rather, what’s the best parts of what you do get right? How can we open up a dialogue to think about domestic labor?”

The “4.5 Hours” project is meant to get people thinking differently about labor, she said.

“Labor is not just wage labor. Labor is not just your job that you go to 9 to 5, but labor takes place in all sorts of ways,” Standley said. “I mean, somebody has to do it. Somebody needs to sweep the floor, do the cooking. But if we have a more integrated view of labor, then it wouldn’t just be about gender any more.”