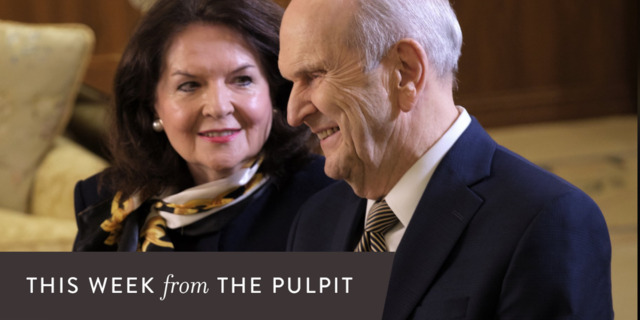 Editor’s note: «This Week from the Pulpit» highlights recent messages by General Authorities, General Officers and leaders of the Church

Sometimes it isn’t until after a trial has passed that we realize how the Lord was blessing us. Great wisdom and faith are often necessary to recognize silver linings when we are still surrounded by clouds. If you are searching for peace and answers to the “whys” of this pandemic, you can lean on the faithful words President Russell M. Nelson and Elder Jeffrey R. Holland shared this week.

On Facebook, President Nelson expressed that he has felt “great sorrow” and “great compassion” for those who have suffered during the pandemic. And yet, President Nelson writes that he and his wife, Sister Wendy Nelson, have found silver linings during this time.

►You may also like: President Nelson on the difficult decision to close temples: ‘What would I say to the Prophet Joseph Smith?’

First, he points out that many people have “re-enthroned their homes as sanctuaries of faith” and found deeper testimonies on the eternal nature of families. Second, many have learned that the way to mitigate fear is to “immerse oneself in caring for other people.”

He ended his brief but powerful message with this reminder:

“Dear friends, the road ahead may be bumpy, but our destination is serene and secure. So, fasten your seatbelt, hang on through the bumps, and do what’s right. Your reward will be eternal.”

Elder Holland also found a silver lining in the increased personal time he has had lately due to the cancellation of many speaking events. Those extra hours have become times of self-reflection and contemplation that Elder Holland calls “a luxury.”

“There are many ways that we can learn to be more careful, more thoughtful, more grateful, more spiritual—and I believe that for many of us, the COVID-19 pandemic is one of those ways. We would be foolish to miss out on this sacred opportunity to search our souls, do a little repenting, and look for how we can be better and kinder,” wrote Elder Holland on Facebook.

►You may also like: Learning from solitude: Elder Holland on taking the time to be alone like the Savior did

Hopefully President Nelson’s and Elder Holland’s words brought the Spirit into your day. Read more thoughts from Church leaders below to help you continue to find the silver linings in your own life.

In continuation of the Church News series “Women of Covenant,” Sister Amy Wright, a member of the Young Women general board, taught how women can receive the blessings of priesthood power.

“I have learned from experience that covenant women endowed with priesthood power can call upon divine help from heaven to perform the miraculous,” wrote Sister Wright.

While her oldest son was serving a mission in Italy, Sister Wright was at home battling cancer. Her treatments would be complete a few weeks before her son finished his mission, so Sister Wright looked to his homecoming as a “beautiful light at the end of a very dark tunnel.”

As her son’s return drew near, Sister Wright experienced complications with her chemotherapy access port. If the port could not be fixed, surgery would be needed to replace it and her treatment schedule would be extended, meaning she would still be battling the effects of chemotherapy when her son came home.

After multiple nurses were unable to access the port, Sister Wright cried out for divine help:

“Calling upon the powers of heaven I uttered under my breath, ‘Heavenly Father, I need your help and I need it now!’ The only way I can describe what happened next is that ‘something moved, something seemed to pop.’ I asked the nurse what had just happened, and she replied, ‘I have no idea, but your port is working.’”

Sister Wright concluded her message by testifying that priesthood power “can be manifest in our daily lives, predicated not by gender, but by obedience to the laws and ordinances of the gospel.”