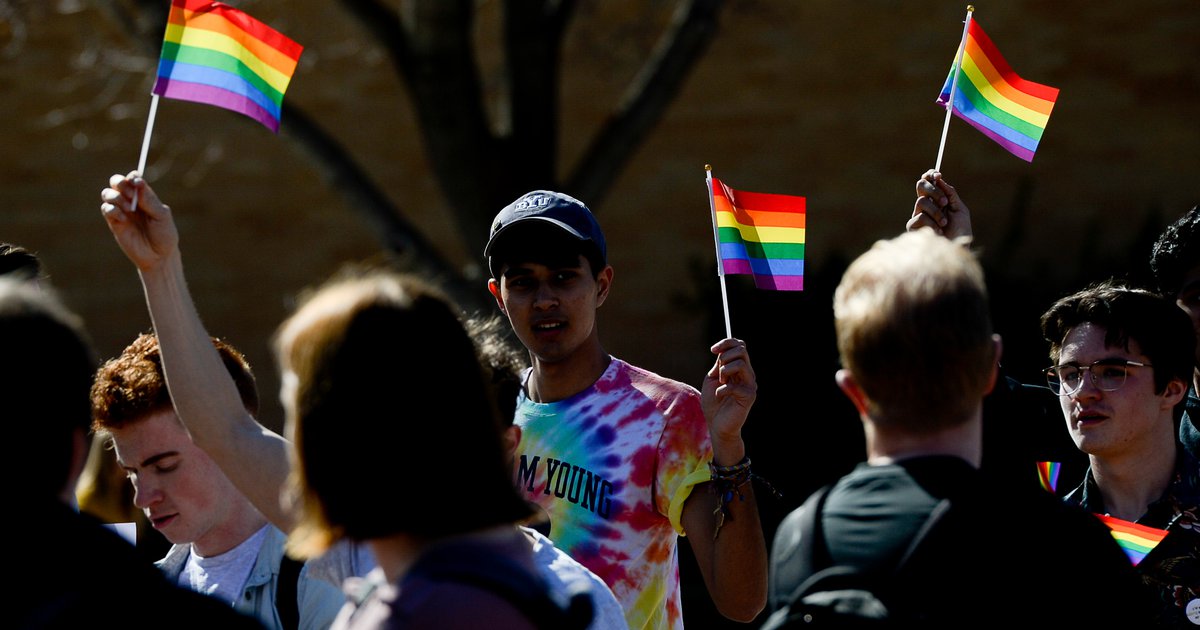 Ben Asplund had always dreamed of attending Brigham Young University. But after two years there, he won’t be returning for another semester.

The sophomore will transfer to Utah Valley University this fall to finish his degree in communication, he said.

“I pictured myself graduating from BYU, [as] my parents did,” he said. “It was the only school I applied to and, when I got in, it was a dream. … There’s no question about it, though, I can’t stay here.”

The school, which is owned by The Church of Jesus Christ of Latter-day Saints, clarified its prohibitive stance on gay couples Wednesday, in what many students considered a painful reversal. Students have said they were told two weeks ago by Honor Code staff that the February update had meant they could kiss, hold hands with and date a same-sex partner.

A few came out because of that, and said the latest update has made the hate and discrimination against them worse by putting targets on them. At a Thursday campus protest — the second to draw hundreds of students in two days — one counterprotester chanted, “Transfer. Transfer. Transfer.”

And in quiet moments since the announcement, some, like Asplund, have thought about whether they should transfer schools to go somewhere where they might be more accepted.

On Wednesday night, following the school’s announcement, the OUT Foundation, a BYU queer alumni group, started a fund to help those who want to leave the school. The group raised more than $7,000 in donations in the first 12 hours, and had exceeded its $10,000 goal by Thursday afternoon. It set a new goal of $20,000.

The money will be used to assist students who need it for paying for transcripts, transfer application fees and covering tuition that’s typically higher at other schools in the state.

“The costs of transferring can be a lot,” said Chris Taylor, the development coordinator for the foundation, who helped set up the account. And he’s personally experienced it.

In leaving the school, he lost his full-ride scholarship and some credits. He also spent about $100 in fees. But it was worth it to him, Taylor said. And he wants to help others in a similar situation.

“I want all students to feel like there’s a safe education available for them in Utah,” Taylor added. “They don’t have to hunker down and hide at BYU. There are resources in this state so we can make it so no one has to hide.”

It can be particularly hard to leave BYU, though, and for some, it may be harder still as a gay student. For instance, the Honor Code, before the section was removed, explicitly prohibited “all forms of physical intimacy that give expression to homosexual feelings» at the university. Those who acted on such feelings could be punished or suspended — and still can be, according to the clarification Wednesday.

Taylor said he’s heard reports from students who said the school sometimes withholds transcripts for those in violation of the Honor Code until their case is resolved. Many students fear that because they came out as gay when they thought it was OK, they’ll be disciplined in coming weeks and might not be able to get the paperwork required to transfer to another college.

Carri Jenkins, BYU spokeswoman, said that’s not the case and students will be treated with “sensitivity, love and respect.”

“The only exception,” she said in an email, “would be a matter of academic integrity, where a violation could result in a grade being changed. Again, this is standard procedure within higher education in matters involving a cheating violation.”

Even more, BYU’s tuition is cheap compared to other schools in the state — it’s about $5,000 per year, compared with $9,000 per year at the University of Utah — and the private school offers a lot of scholarships. For those coming in from out of state, too, the price is the same as it is for in-state residents as long as the student is LDS. At the U., tuition is about $30,000 for nonresidents.

Some students coming out as gay and wanting to transfer might lose financial and emotional support from their families, added Will Damarjian, who uses they and them pronouns and helped set up the scholarship fund.

“This scholarship hopes to help students who are struggling at BYU have the financial empowerment to transfer somewhere they feel safe and to be themselves without fear of the serious financial repercussions that may bring,” they said.

The OUT Foundation will be launching an application online this week — and students wanting to transfer from BYU can list what they need help covering, including fees, tuition or housing.

Emma Ramirez, the student outreach coordinator for the group, added that while this fund is new, the foundation will also continue providing scholarships to BYU students who want to stay at the school. “Our whole thing is supporting people where they are and where they need to be,” she added.

Others in the community have stepped up to help, too. Some professors are offering to write letters of recommendation. A few Latter-day Saints across the country have posted on social media that they’ll read college essays or proofread transfer applications. Meg Conley is one of those.

The active LDS mom and writer, who is also bisexual, wrote on Twitter and Instagram that she’s willing to edit anything that students need. She’s already been flooded with responses. And she jokes that a “speciality squad” has joined her in providing assistance.

“I just don’t want there to be any roadblocks for these kids,” she said.

I know a lot of BYU students feel they need to transfer after today. I’d like to help. I’ll edit any essay you need to write for your transfer application. I’ve got time for one a week for the rest of the school year. My email is in my bio.

🌈 a Mormon mother who loves you

Asplund said he appreciates those coming together to help. Since he’ll be losing his BYU scholarship, which covered half of his tuition, he’ll need help paying for UVU — where he wasn’t offered anything to replace it.

Most schools, too, charge students a fee to transfer. Getting transcripts from BYU is about $10. The cost to apply to the U. is another $55. Whether a student will get in also depends on grades. UVU is open enrollment, so the transfer there is a little easier. The U. is a bit more stringent on whom it accepts.

Chris Nelson, the school’s spokesman, said, however, that the university will use a “holistic review process” in evaluating transfer applications and consider more than just GPA.

“I know representatives from the U.’s LGBT Resource Center are happy to talk with any potential student and provide guidance and support with admissions [including connecting with admissions counselors and helping to advocate on their behalf],” he added. That includes talking about which credits will transfer.

After the announcement from BYU on Wednesday, some students said they’re considering but haven’t decided whether to leave. Tiauna Lomax said it’s an option for her — but she doesn’t want to rush into anything.

She came out as bisexual last week, feeling confident after the Honor Code section on “homosexual behavior” was removed. Now, she feels “traumatic whiplash” and gaslit. “It’s obvious that I’m not wanted here,” she said at the student protest.

Some students plan to stay at BYU and continue fighting the reversal, which many said blindsided them. A few are planning sit-ins at the Honor Code Office to pressure the staff there to reconsider.

Addison Jenkins, a gay student who previously left BYU, suggested “it is not worth any small precious pieces of good that you can squeeze out of the experience.” He added: “BYU is dangerous to your mental and physical health. Get out.”

That’s the case for Asplund, who said his dreams are no longer about graduating from the university. He just wants to be OK and be open about who he is.