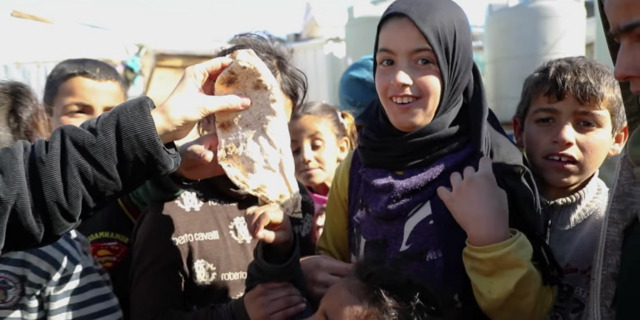 Hungry refugees in Syria are receiving food in an unusual way, thanks to a collaborative effort between the Greek Catholic Church and Latter-day Saint Charities. Armed conflict in the region has displaced millions of people and food shortages have caused great suffering. Now, however, a mobile bakery that can be moved about to supply freshly baked bread is feeding tens of thousands of people every day.

Mike and Liz Freckleton, Latter-day Saint Charities representatives, described the impetus for creating the bakery: “Our good friend Mother Agnes, who’s the Abbot of a Syrian monastery, has worked for years to bring relief to the Syrian people embroiled in civil war. She’s been fearless about entering areas of armed conflict to minister to displaced people. But those people needed food—especially bread—and transporting fresh bread across battle zones can be extremely dangerous. What Mother Agnes needed was a way to bake and distribute bread in areas isolated by fighting.”

When Mother Agnes described this need to the Freckletons, they began to think and pray about the challenges. “We just felt the Lord would open up a way,” Mike said.

Mike Freckleton is a retired radiologist and Liz a former occupational therapist. They may have lacked specific skills to create the needed machinery, but they are organizers, and they met often with Mother Agnes, who brought Abdo al Haddad into the conversation. He was from a family of bakers that goes back centuries, and he also felt the same concern for his Syrian people and the suffering of those without sufficient food.

A series of challenges had to be worked out. Such a bakery had never been built, and limited space required a novel design. An additional requirement was that the bakery be automated so fully that one operator could run it. “We met many times,” Liz Freckleton said, “and time and again, things fell into place. Doors opened in ways that we never could have expected.”

In a miraculously short time—four months—scribbles on a notepad turned into a tightly confined automatic bakery housed in a standard shipping container. The design included a mixer that combined the ingredients as well as a conveyor belt system that sliced the dough, shaped it, allowed it to rise, baked it and finally dropped it into the hands of waiting operators.

Parts were machined in Egypt and shipped to Lebanon for assembly. The bakery was ready to be transported into Syria, but government regulations and customs laws had to be satisfied and the intersection of multiple national and international agencies and ministries had to be coordinated.

“Our prayers continued to be answered,” the Freckletons explained. “All the complications were worked out faster than we thought possible.”

The Syrian government agreed to protect the equipment and pay for the ingredients used to resupply the bakery. But then the onset of the COVID-19 pandemic added new safety requirements. Still, the mobile bakery is now serving camps of internally displaced people in Northeastern Syria, with the capacity to produce up to 120,000 pieces of Arabic bread in a 24-hour period. That’s not a typo—one hundred and twenty thousand pieces in a day.

The bakery is a turn-key system that can be set up in an area of need within a few hours, with fresh bread coming off the conveyor belt just two hours later. Two more of the mobile bakeries have now been built and will soon be in operation in Lebanon, another country currently in desperate need of humanitarian aid. These bakeries are able to produce many varieties of locally preferred bread, from flat bread to leavened loaves.

Mother Agnes is joyous about the success of the program and hopes to see it continue.

“We thank with all our hearts The Church of Jesus Christ of Latter-day Saints for all their support in conceiving and in executing the mobile automatic bakery,” she said. “We hope that we will have more than one so that we can cover all the needs of all the people starving in Syria and maybe elsewhere.”

The Freckletons said it was an honor to partner with Mother Agnes and others who were involved.

“It was a marvelous experience to work with such devoted people,” Mike said. “We felt the power of the Lord in everything we did.”