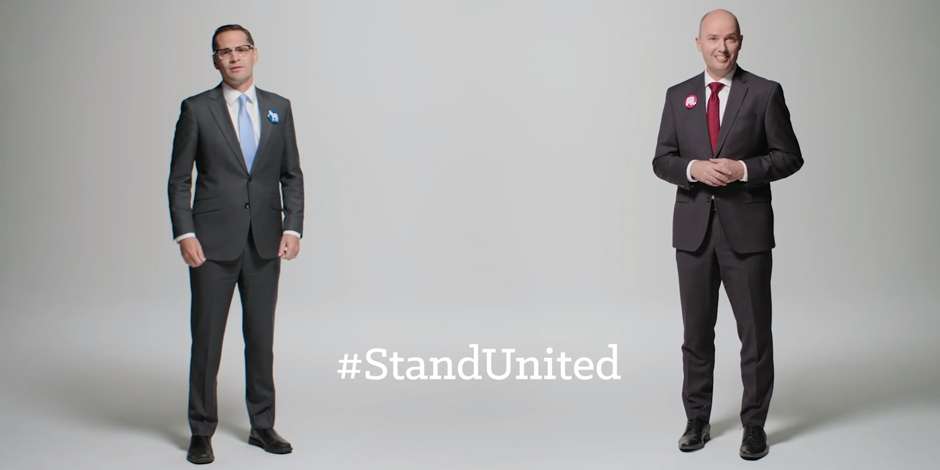 The most popular of the three ads, titled “We Approve,” features Cox and Peterson giving a call to “stand united” in the pursuit of a better way to campaign.

At the time of this article, the video has over half a million views on social media alone and has been featured in major news organizations around the world. This includes an interview with the BBC. The two candidates discuss how the idea for the unique ads occurred, what qualities they appreciate in their opponent, and the hope they have for a return to respect in politics.
The ads are in harmony with the Church’s stance on civil discourse in politics. In its official statement on political neutrality, the Church states it expects its members “to engage in the political process in an informed and civil manner, respecting the fact that members of the Church come from a variety of backgrounds and experiences and may have differences of opinion in partisan political matters.”

In the most recent General Conference, President Dallin H. Oaks said, “We live in a time of anger and hatred in political relationships and policies. We felt it this summer when some went beyond peaceful protests and engaged in destructive behavior. We feel it in some current campaigns for public offices. Unfortunately, some of this has even spilled over into political statements and unkind references in our Church meetings.

In a democratic government we will always have differences over proposed candidates and policies. However, as followers of Christ we must forgo the anger and hatred with which political choices are debated or denounced in many settings.”