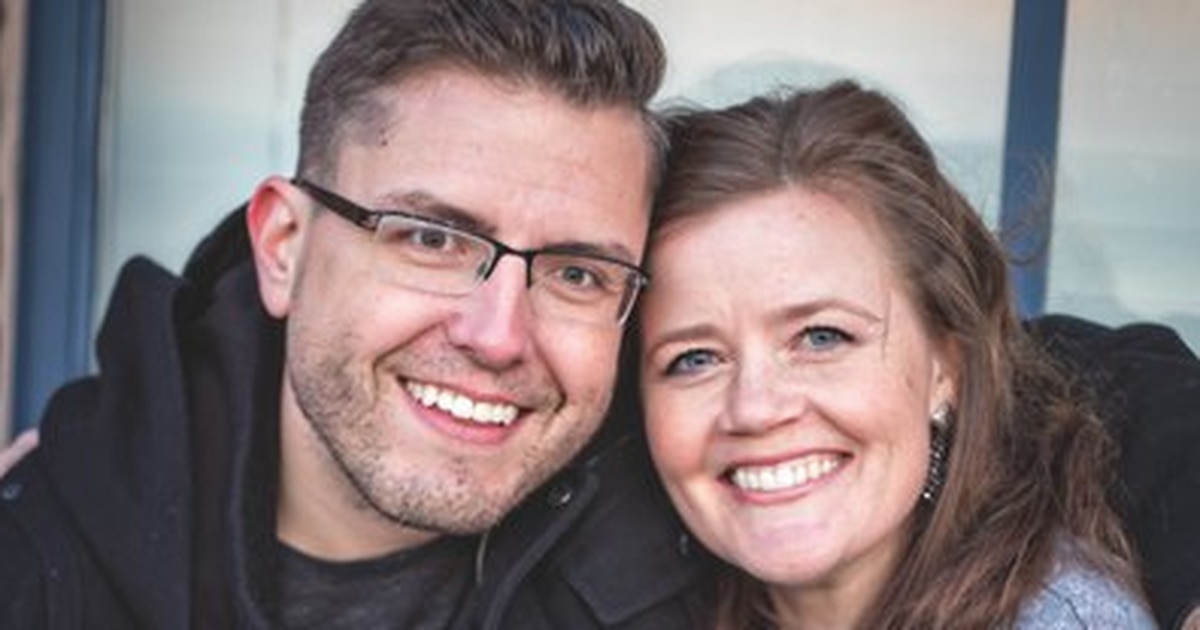 If any gay man and straight woman could make a marriage work, Josh and Lolly Weed could.
They tried. They really did.
For 15 years, the Mormon couple did everything their church advised. They were best friends. They prayed together, studied scriptures together, worshipped together, raised four daughters together. They even shared careers as marriage and family therapists.
And they were not in denial at their wedding. They went into it eyes wide open, fully aware that Josh was gay and Lolly wasn’t. They knew it would be tough, but they believed, with God’s help, a satisfying union was possible for them.
It wasn’t.
Internalized homophobia and self-loathing at the core of Josh’s identity began to unravel at about the same time as Lolly’s need to be loved by someone who desired her began to expand.
On Thursday, the two announced they are divorcing.
“Our marriage was absolutely beautiful,” Josh wrote in their 11,000-word blog post. “… Yet it contained an undercurrent of pain that we were not able to see clearly or acknowledge for many years, which made continuing in it impossible.”
The husband and wife realized what they were missing: yearning, craving, longing, passion.
“That romantic attachment was essential to a functioning marriage,” Lolly added. “… It was something that we never had and, hauntingly, that we never would.”
They made their intentions public because so many other LDS couples had looked to them as role models.
The Weeds then took an extraordinary step: They apologized to Mormons who may have followed their example (even though they never advocated that anyone do so) and to the whole LGBTQ community.
“We support everyone’s journey,” Josh told The Salt Lake Tribune from their Seattle home. “We cannot say what another one’s path should be.”
They will not urge those already in mixed-orientation marriages to break up, Lolly said, but if anyone is contemplating entering a new one, their professional and personal advice is “not to do it.”

In 2006, The Tribune profiled three Mormon pairs of gay men and their straight wives and how they were trying to make it work. Two of the couples, including the Weeds, insisted on using pseudonyms for fear of exposure.
By then, The Church of Jesus Christ of Latter-day Saints no longer urged gays to marry someone of the opposite sex as a “solution” to same-sex attraction. But it did forbid any physical intimacy outside of heterosexual marriage.
Being homosexual is not a sin, the church declared, but acting on the attraction is.
For many Mormons, the choice was whether to leave the faith, remain celibate or enter a marriage with the opposite sex.
The Weeds chose the latter.
Josh knew he was gay as early as the eighth grade, and, at age 16, the first nonfamily member he confided that to was his best friend: Lolly. Her grandfather had died of AIDS, so she seemed to understand some of what he was facing.
He was candid with his bishop and LDS Family Services staff about his attractions and served a two-year mission in South America. Not long after returning home, he married his friend.
Six years after that first Tribune article, Josh and Lolly went public with their names, faces and feelings about their life together.
That 2012 blog post “went viral” and led to a slew of newspaper and TV interviews.
“Suddenly we were thrust into the world of LGBTQ Mormons,” Josh recalled in the most recent blog. “And what we saw as the years moved forward was at once inspiring and utterly heartbreaking. … Our understanding of this issue changed with every person we met, with every single story we heard.”
The majority of responses were positive, Josh told The Tribune at the time, including many touching accounts of other gay men or of gay couples living in healthy, monogamous relationships.
There was also the occasional allegation that Weed was part of the “ex-gay movement” and was touting “reparative therapy.”
Absolutely not, he told critics. “I am totally against reparative therapy, and trying to change sexual orientation is a disservice to clients.”
Though the Weeds did not urge other couples to follow their course, some did.
“As long as our story was out there, we knew it would be used against the LGBTQ people,” Lolly said in the recent interview. “Every talk we’ve ever given, we’ve tried to mitigate that damage, but as long we existed as a couple, people could still point to us.”
That is why, she said, they felt obligated to tell the world they were splitting up.

Josh had been raised to believe that being gay was “not real,” that it was “evil,” “an abomination,” “tantamount to bestiality and just shy of murder,” a “crime against nature,” just a “feeling,” “merely a temptation and a tendency” or a “trial to bear.”
He was taught that he would be “fixed” in the hereafter.
Then, about three years ago, a friend, a straight friend, pointedly posed a question: “Josh, you realize your sexual orientation is beautiful, right? Not just tolerable. It’s beautiful.”
Josh had always viewed himself — deep inside — as broken, not beautiful. But that night Lolly assured him that his “gayness is a part of who you are. … You are as God intended you to be.”
“Though we had never fully embraced these ideas as reality before,” Josh wrote, “we felt the spirit confirm them powerfully in that moment. The truth of Lolly’s words rang in our bodies.”
Afterward, he began to strip away layers of denial, which led him to recognize suicidal thoughts that had been lurking within the whole time.
“My life … my children, my wife, my career, my friends. It was filled with so much joy. The things I talked about in my coming-out post in 2012 weren’t false,” Josh wrote. “The joy I felt was real! The love I felt was real, but something in me wanted to die.”
Just as he began to accept his gayness, his mother died and Josh and Lolly stopped having intimate relations.
“I simply was unable to authentically engage in heterosexual sex again,” he explained in the blog. Having sex with a woman “was dishonoring on an intrinsic level, to the core of who I am.”
Though she understood the reason Josh was pulling away, it delivered a further blow to Lolly’s self-esteem.
Previously, they had a “robust sex life,” Lolly wrote. “We put forth a lot of effort and were ‘mechanically’ good at sex — and it did help us to feel intimate, and for a time that closeness did help us to feel content in our sex life — but I don’t remember him ever looking at me with passion in his eyes.”
Clearly, it wasn’t good for either of them.
“Platonic love is simply not enough, no matter how much we hoped it was,” Lolly conceded. “God designed us to need and want romantic attachment.”

As a way to break the news about the pending divorce to their four daughters, Lolly drew on a story about a bat, trying to be a bird.
Their father “was gay, trying to live a straight life,” she told the children, who range from ages 2 to 11. “That is the essence of internalized homophobia — trying to be something you’re not because you think it’s ‘bad’ or ‘wrong.’”
Their eldest, Anna, told Lolly: “Mommy, I don’t want to hurt your feelings, but the spirit is telling me that this is the right thing to do. Even though it will be hard. You guys aren’t supposed to be married anymore.”
Next came the time to inform the world of LGBTQ Mormons. The couple could see that their 2012 coming-out post had been used by Mormon family members to bully gays or pressure them “to get married to a person of the opposite gender,” Josh wrote, “sometimes even disowning them, saying things like, ‘If these two can do it, so can you.’”
They felt heartsick, Josh wrote, when they heard about how their story was used “as a battering ram by fearful, uninformed parents and loved ones, desperate to get their children to act in the ways they thought were best.”
There is no taking back the things the couple said on camera to “millions of people,” he wrote. Yet Josh takes comfort “in the fact that those uncomfortable doses of denial can now be refuted and put to bed.”

What about their church?

Although the couple were sealed in a Mormon temple, not all their local LDS leaders thought it was a good idea for the Weeds to acknowledge their mixed-orientation marriage.
After that 2012 post, for instance, Josh was released as an early-morning LDS Seminary teacher. And the couple endured criticism from fellow Mormons.
However, after the recent blog post, likewise going viral, they’ve heard mostly kind and supportive comments from family members and their religious community, including ecclesiastical leaders.
Lolly’s faith is now tempered by the belief that Mormon authorities are fallible and that past statements about sexual orientation and some current policies are wrong.
“When we came to this decision [to divorce] we were angry,” Lolly said in the interview. “This was our life. We made choices based on their advice and counsel.”
Still, she feels compelled to stick with her church.
“This is my faith tradition,” she said, “and I’m not leaving.”
Josh’s connection to deity, he said, is as strong as — if not stronger than — ever.
“I can choose to attend the Mormon church … until the day I die,” Josh wrote. “… I can choose to be in that pew, and I can choose to sit with my children and best friend and honor what I love in this faith tradition.”
But, he said, he “cannot choose what the institution does to me/with me.”
In 2015, the Utah-based faith adopted a policy that deems gay Mormon couples “apostates” and forbids their children from religious rituals including baptism until they are 18.
If Josh finds a lover — something he desires — his faith might not allow him to baptize his two youngest daughters.
The LDS Church mandates celibacy for its gay members, requiring the same standard for unmarried heterosexuals.
But, the Weeds and others note, the two are hardly analogous.
“Single Mormons go to bed every night pleading with the Lord that they will fall in love with someone tomorrow,” Josh wrote. “Gay Mormons go to bed every night pleading with the Lord that they will never fall in love with someone.”
For their part, both Josh and Lolly hope they find new spouses — drawn to their truest selves.